No, I did not arbitrarily switch over to roman numerals. This is the point when I dropped out of the Utilitaire 12. Saturday morning I went for a 24 mile ride out of the city and back with Rob. I had plans for the rest of the day so that was it for the bike. Sunday looked like even more beautiful weather, and I hatched a plan to ride out on my 50 mile loop early in the morning. The power company had sent us a letter a few weeks ago telling us there would be a scheduled outage for maintenance issues that was going to last all morning, so it was the perfect time to leave for a few hours. I woke up early and tired from daylight savings time, but when the lights went out around 7:20, I thought “well, there’s nothing to do here now so I might as well wake up and get outside”.

Riding was neither fast nor slow, but I was in my zone and enjoying it. The route has a little of everything. A few hills in the city and a few more out in the county farmland. These are contrasted with the fast urban areas going north through Timonium and Cockeysville. That stretch is contrasted by the NCR Trail and runner traffic which slows you to a coast for 7 miles and makes you a little less concerned with your average for the day than enjoying the morning and scenery. All-in-all it’s one of my favorite ways right now to kill a few hours on a Sunday morning before the rest of the world shrugs off last night’s hangover and ventures outside. I stopped at the Bagel Works in Cockeysville for a egg & cheese sandwich and some OJ before going up the trail. I thought about calling it a breakfast run until I remembered that I’d already done that twice. I had some other stuff going on during the day so I didn’t think I’d get the chance to go out later, but no problem–I’d stop by REI (a store other than a grocery store) on the way home and browse the wares for a few minutes. Aside from my stretch on the trail, the rest of the ride went a little too quickly–or maybe I’m slow and the power went out too early. Whichever way you slice it I arrived back in Timonium at about 10:30 – a half an hour or so before the store opened. Faced with the options of waiting at the store or to keep moving, I decided that I liked riding better than standing. Besides, there wasn’t anything I REALLY needed, I was just going to go in and take a look at the clearance rack to see if there was a large windbreaker/jacket for cool dry days with my name on it. Princeton Sports is on Falls Rd. and it’s about 30 minutes away by bike, so that was my next option. The sun was out, there was a little headwind from the south slowing me on my return to Baltimore, but all the bikers I passed on the way out of the city for the start of their morning rides really looked like they were having fun. I know I was. I meandered back up Falls and eventually got to Princeton Sports about 10 minutes after 11. Much to my surprise when I looked up and over, the gates were still down and the parking lot was empty.  I thought, “Well, this is unfortunate. I’m starting to run out of places that I’d like to browse in and time to do it in.” It was about then that I realized that I’d taken a camera, but hadn’t stopped once to take a picture either. At that point I decided to turn back and hopefully regroup later in the day. I’d left my water bottle in the fridge earlier and that toddler-sized carton of orange juice was about 30 miles ago so thirst was starting to kick in a bit too. After a shower I worked around the house and thought about where I could go and what I could do. I even thought about going to the drugstore to buy a battery for a watch I hadn’t worn in 2 years just to get out. I didn’t have the time to devote to another excursion and thinking of destinations a stones’ throw away left me with absolutely nothing I needed.

Where: tried to hit the REI, then Princeton Sports. Everybody was closed.

What did I learn? What I’ve enjoyed most about the experience hasn’t just been the concept of using the bike for utilitarian purposes. I’ve been doing that every weekday for nearly 5 years now. To make the challenges interesting, I’ve tried to go different ways and see different things. I rode on trails and went to places that I haven’t been to in years – if ever. I had a printout of the neighborhood and for a while I was highlighting all the routes until there was so much overlap that you couldn’t tell where one started and the next one ended. I work right next to the BMA and I never go over there, even though some afternoons I need to get out of the office for an hour or so. Going to do more of that. I’ve thought of some more places I’d like to explore around the neighborhood too, I’m just not going to get the chance to do it this week. Even more than my two-thirds filled out utilitaire card, I’m proud of this.

Since the start I’ve been on the bike for all but one day – a Saturday when I left for PA at 6am and got back at 8pm knowing that I’d be up for a century at 6am the next day. 90% of the remainder included some sort of utility biking. There’ll be an ‘X’ on every day for this week too. That’s good enough for me. I could have gone to the library Sunday, but Sunday was not a library day. 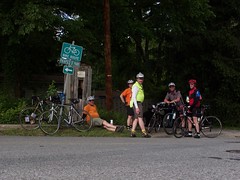 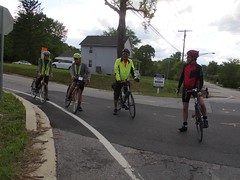 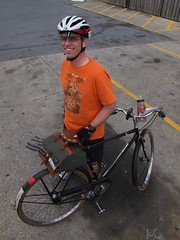 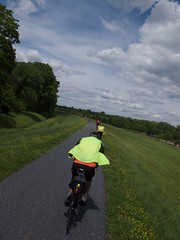 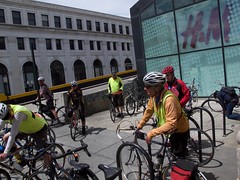 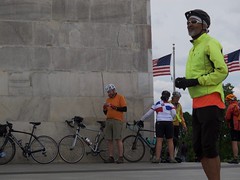 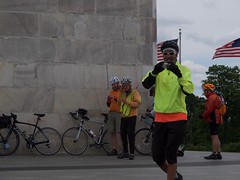 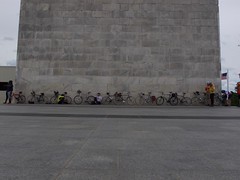 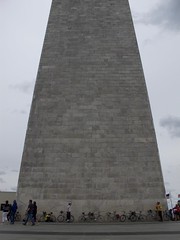 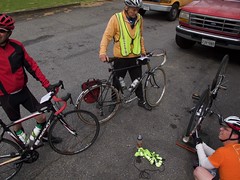